We are very grateful to Oonagh Phillips for this essay, which was originally written by her as part of the Distance Learning Course of the Society of Botanical Artists (SBA), and also to The Library, National Botanic Gardens, Glasnevin for supplying a selection of images of Lydia Shackleton’s work held in the Library. Both the images and the text are copyrighted and may not be reproduced without written permission. 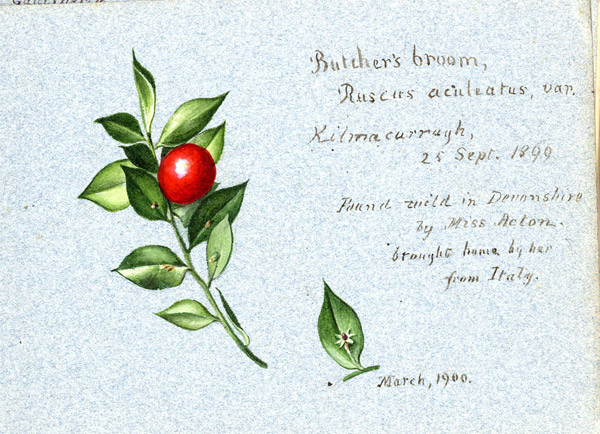 It is true that sometimes we don’t see what’s right there in front of us. I have long admired botanical artists from all over the world, and have been inspired by them, but I hadn’t looked closer to home, to botanical painters of yesteryear in my own native Ireland. Our island is not a country renowned for this art form in the 19th century but we have one of the most beautiful botanic gardens in Europe, founded in 1795, in Glasnevin.

I made an appointment with Library Assistant, Colette Edwards, at the National Botanic Gardens, and in the archives, she showed me the beautiful works of some accomplished artists of this period, one being Lydia Shackleton (1828–1914).

I had come across the most prolific Irish botanical artist of her time. Her paintings are rarely exhibited but I was hugely impressed by the body of work produced by her. There are what seemed like endless paintings of hellebores and orchids, peonies, carnivorous plants and Lachenalias, native plants of Ireland and some recorded by her in the United States. 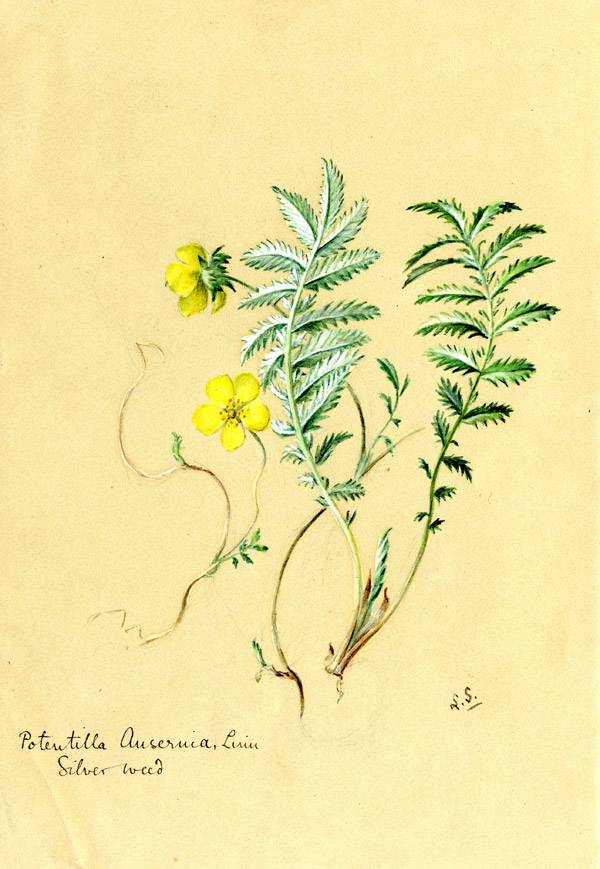 Lydia painted at the National Botanic Gardens from 1879 until 1922. She was a keen and industrious worker. On a visit to Glasnevin, William Robinson, a pioneer of landscape gardening in the ‘natural manner’ during Lydia’s activity there commented to Moore, “Poor thing, she is very industrious”! No wonder – she painted over a thousand orchids and that was only a start!

Born at Grisemount, Ballitore, Co. Kildare in 1828, Lydia was the third in a family of thirteen children. The Shackletons were a renowned Quaker family who ran a reputable boarding school at Ballitore. The Quaker educational system encouraged the teaching of languages together with the study of plants. They took a great interest in nature.  Botanists William Henry Harvey, Isaac Carroll and Thomas Chanlee were educated at the school and it’s likely that she was influenced by their passion for plant life.

Lydia was also a poet and in her poetry she illustrates, too, that she took an interest in and had a wide knowledge of many aspects of nature from an early age. In later life she recalled in a poem that as a child of four years (1832) in Co. Wicklow

“I found upon the strand,
Mallows and horned poppies that grew among the sand’. (1)

Her early years were devoted to caring for and teaching many of her nieces and nephews, and during that period she had little time to pursue her interest in painting, horticulture and reading. She strove for perfection which indicates that her character was perfectly suited to painting plants in the botanical style. A keen eye for detail was of interest to her as a botanical artist. Her nephew and family historian, Jonathan Shackleton, sent me a copy of a drawing well rendered by her of her home at Grisemont when she was only twenty years of age. Perhaps this was not so unusual, but her drawing skills were well honed by then and impeccable drawing is required for the accuracy of botanical works.

In 1850 Lydia trained at the government school of design attached to the Royal Dublin Society, a sister institution of the National Botanic Gardens. Here she expressed her dislike of copying other artists work and refined her skills, after which she opened a school in Lucan where she taught for twenty years.

The more I researched the life and works of this woman, the more I became captivated by her accomplishments and how she lived her life. An unmarried and independent woman, Lydia made a trip to America in 1873 and stayed for three years. She painted when she was in Ohio and Pennsylvania, anywhere she went, a consummate plant enthusiast and painter. I loved the small book containing, on tinted paper, beautifully executed watercolours of North American wild flowers.

This was an exciting time for plant gatherers and explorers and for botanical artists like Lydia and it was in 1873 that Frederick Law Olmsted and Calvert Vaux had completed their work in Central Park in New York. (I worked in Central Park as a volunteer for four years and it was there that I decided to study botanical art at the New York Botanical Gardens.) 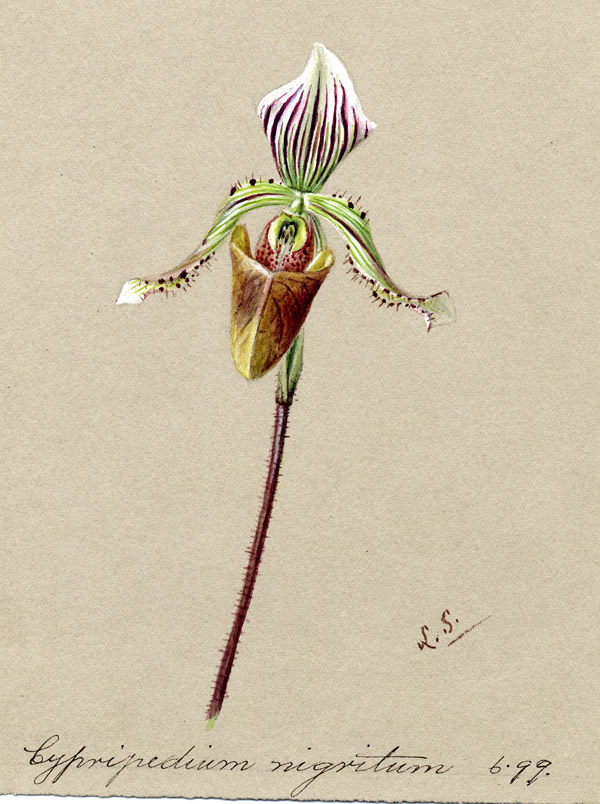 In 1883, Frederick Moore commissioned Lydia Shackleton to paint the gardens’ orchids,pitcher plants and peonies. She spent twenty three years of her life painting at Glasnevin and her work, including the thousand orchids mentioned, is an impressive reflection of the horticultural and botanical achievements of the Botanic Gardens in the late 1800s and early 1900s. Frederick Moore had a particular interest in tropical plants and devoted a lot of his time to the improvement of the collection.

“The purpose of this vast watercolour orchidarium is clear: each orchid that blossomed in the Glasnevin Orchid House was a potent symbol of the primary importance of Glasnevin in the orchid world at the time; not even The Royal Botanic Garden, Kew, could equal the Dublin collection.” (2)

The portraits are a significant record of orchid hybrids in the gardens, some of which are no longer in cultivation. Lydia painted each one in watercolour. 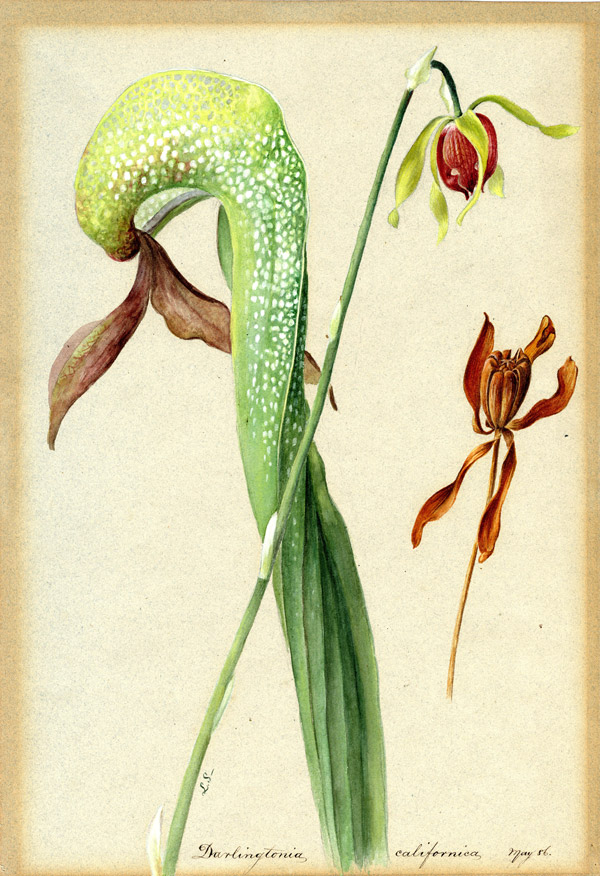 Choosing to highlight one of her works wasn’t easy, there were so many that I liked very much but I have settled on the Darlingtonia californica, which shows a hooded flower head with leaves and the seedhead. The lace effect, its translucency, on the flower head is perfection and I like the effect produced by working on tinted paper.

I feel that the artist was as dedicated to her craft as one can be. She painted plants in a way that indicates to me that she enjoyed her work, and captured the essence of the plant which she was portraying. Her hellebores virtually dance a merry dance on the page. It must have given her huge satisfaction to produce these beautiful works that contributed so much to the world of horticulture, a passionate artist who cared about the greater good. 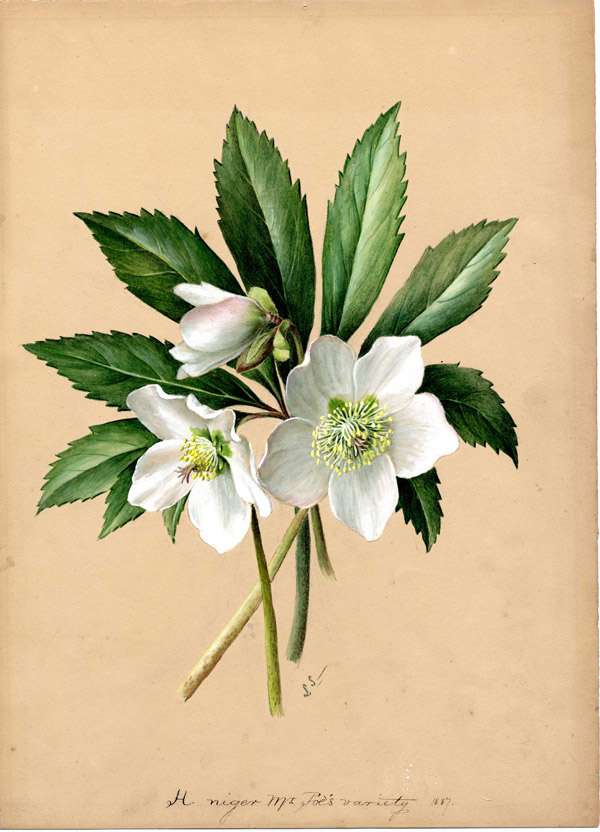 There are also sketch books containing watercolours of Irish wild flowers and of plantsfrom Irish gardens such as Kilmacurragh and Mount Usher, Co. Wicklow These are also preserved in Glasnevin. Some of her sketches of alpine plants, such as a Cladonia lichen,suggest that she spend time in Le Sentier and Le Brasus, Switzerland in 1879.

Returning to America (1888-91), she painted flowers in Massachusetts and New Jersey. It seemed that she never stopped doing what she loved, I admire and envy her skill and her work ethic, “The Only Rule Is Work” (3) attitude.

It was recorded in October 1897 at a meeting of Dublin Naturalists Field Club, of which she was a member, that a series of beautiful watercolour drawings of flowering plants,prepared in part for the Botanical Collections Science & Art Museum, was shown by Lydia Shackleton’ (Anon 1897).

Her work was briefly described in the Capuchin Annual 1976 by M. Scannell: “the illustrations are well drawn, glowing with colour and are botanically correct. Some with large flowers and veined leaves have a sculptured quality. She showed sensitivity to the character of the flower while appreciating line and pattern . . . Miss Shackleton is probably the foremost flower portraitist in Ireland”.

In her later years, Lydia’s eyesight deteriorated, and eventually she became blind and was forced to stop painting. It is no surprise to me that she bore the cross with the great patience that she had shown throughout her life. She had the support of a large extended family (she was a cousin to Ernest Shackleton, Antarctic explorer). In a life well–lived indeed, she made the best of her time and used her skills and intelligence to enhance the lives of others, it doesn’t get much better than that. I hope that one day she will get the recognition she deserves. She died in Dublin on 10th December, 1914.