News
You are here: Home / News / Blog / Painting an Irish Rose for Yeats 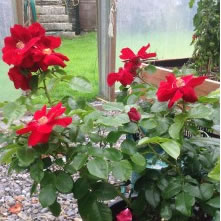 A Blog by Holly Somerville

This year celebrates the 150th anniversary of the birth of WB Yeats. The Secret Gardens of Sligo, The Yeats Society and Yeats 2015 are launching a brand new Irish rose to be named ‘WB Yeats’ in his honour. It takes up to eight years to develop a new rose, in this case bred by Dickson’s Nursery, so the process is expensive.

In March I was contacted by Lorely Forester of the Secret Gardens of Sligo, who is fundraising to cover the costs of breeding the rose. We came to an agreement that for a small fee I would paint the rose and permit her to print a limited edition. Donors giving €500 or more will receive a signed, numbered, giclée print of the painting of the WB Yeats rose. These prints are gifts to donors and will not be available again, or elsewhere.

Lorely had a busy summer which included creating the WB Yeats Garden at Bloom in the Park in May (winning a well-deserved gold medal!) and then recreating it later in Sligo. We finally met at the end of August and I took home a wonderful multi-flowered specimen of the rose, a scarlet floribunda with bright golden stamens.

I took many photos, as I knew the flowers would not last long, although all the photos do come out much more orange and garish than the beautiful deep velvety-red original. It is generally very hard to reproduce a true red in prints or photographs.

On a large board of stretched Sennelier hot-pressed watercolour paper I roughly sketched the whole painting (A3), using a combination of photos and the real plant. I then concentrated on painting one finished flower entirely from the living plant so that I had all the colour notes for painting the rest of the flowers from photos when they died. (I prefer not to work in this way and would ideally paint the whole work up together using the living plant.) Apologies for the greyness of the close-up photos. 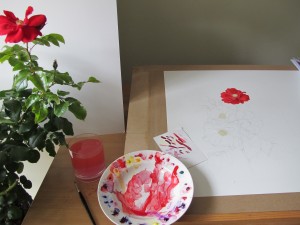 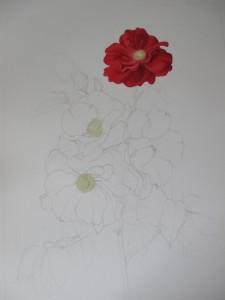 I used a size 4 Winsor & Newton Series 7 miniature sable brush for the first layers of paint, and moved down to size 1 and then size 000 for the later fine detail. The colour was SO tricky! I started with Winsor Red, warming it up in areas with Winsor Orange, and using Schminke Horadam Brilliant Red Violet on top of the Winsor Red to get a deeper, more purple colour in places. I also used Ultramarine Blue, Alizarin Crimson and a tiny bit of Burnt Umber to get the darker areas, but sparingly to avoid the red becoming dirty. The buds were very purple-blue and I added a touch of Cobalt Blue on these in the paler areas. 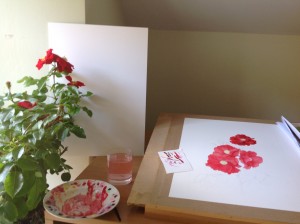 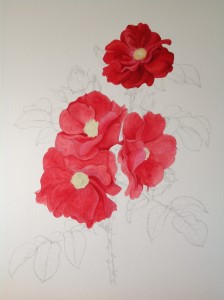 The leaves had fresh lemony-green young growth (Viridian, Schminke Aureolin, Ultramarine Blue) and the older leaves lower down were more blue-grey (Aureolin, Ultramarine and a bit of Burnt Umber for the darkest areas). I added Alizarin Crimson and Burnt Umber over the green on the stems, and for the thorns. The outer circle of warmer anthers were a mix of Aureolin and Winsor Orange, and the cooler centres of the flowers were Lemon Yellow and Aureolin. Finally, I went back over all the roses and to deepen and enrich the reds and darks. On the undersides of the petals which are curling up I used Brilliant Red Violet and Opera Rose (sparingly, it’s a super bright colour but not lightfast). 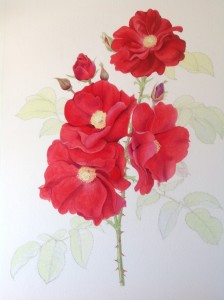 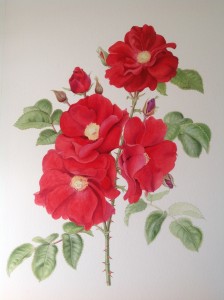 By the time I finished the painting I had a sort of ‘snow-blindness’ from looking at the red for so long, but I learned so much. In watercolour it is not easy to create intense crimson on fairly large areas, and I would highly recommend everyone paint a red rose at least once for practice and experience.

My A3 scanner also behaved strangely with the intensity of the red, and it took a lot of tweaking to get it the scan as near to the original as possible. This scan is still a little bit dark and a tiny bit orange, so I will take the painting to a professional scanner who will also make the prints. 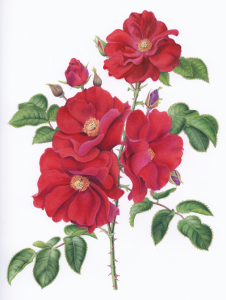 TO THE ROSE UPON THE ROOD OF TIME

Red Rose, proud Rose, sad Rose of all my days!

Come near me, while I sing the ancient ways:

Cuchulain battling with the bitter tide;

Who cast round Fergus dreams, and ruin untold;

And thine own sadness, where of stars, grown old

In dancing silver-sandalled on the sea,

Sing in their high and lonely melody.

Come near, that no more blinded by man’s fate,

I find under the boughs of love and hate,

In all poor foolish things that live a day,

Eternal beauty wandering on her way.

A little space for the rose-breath to fill!

Lest I no more bear common things that crave;

The weak worm hiding down in its small cave,

The field-mouse running by me in the grass,

And heavy mortal hopes that toil and pass;

But seek alone to hear the strange things said

By God to the bright hearts of those long dead,

And learn to chaunt a tongue men do not know.

Come near; I would, before my time to go,

Sing of old Eire and the ancient ways:

Red Rose, proud Rose, sad Rose of all my days.

More information on donating to the Irish Rose for Yeats can be found here:

A Botanical Journey around Ireland