I wonder how many of the artists in the ISBA had their interest in botanical art whetted by the wonderful work of Wendy Walsh? Now 98 years old and still ready to graciously receive guests, Mrs Walsh has been an inspiration to many artists on this island and elsewhere. To meet her and her family in the beautiful surroundings of her home, the early 18th Century Burtown House, was a memorable occasion for a group of us earlier this month.

On 17 May–an astonishingly sunny Friday–about 20 of us gathered in the courtyard and café of Burtown House to be fortified with delicious home-made scones, cake, tea and coffee before our tour of the house and gardens. Seated in our midst was a slight elderly woman with a shock of white hair, accompanied by her daughter Anna who provided care and oversight for her mother as we all gradually overcame shyness and met the artist, asked her to sign treasured editions of her Irish Florilegium and other works, and just generally looked on in awe (or maybe that was only me).

As well as patiently signing the many and varied books and cards, Mrs Walsh agreed to go outside for a group photograph, spurning the offer of a chair and standing with the group between the spreading limbs of an old cherry tree and the grace of a magnolia. 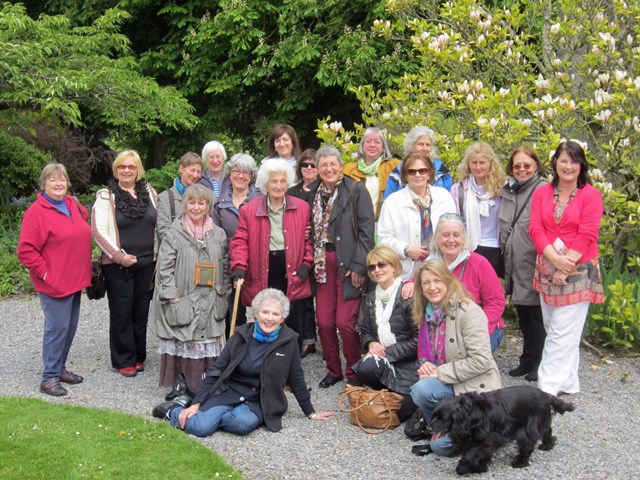 What a happy crew we were, and this was before we had the opportunity to see so much of her work! All through the house, up the stairs, in the various bedrooms, in the hallways, were paintings and drawings from, it seemed to me, most episodes of Mrs Walsh’s long and productive artistic life. 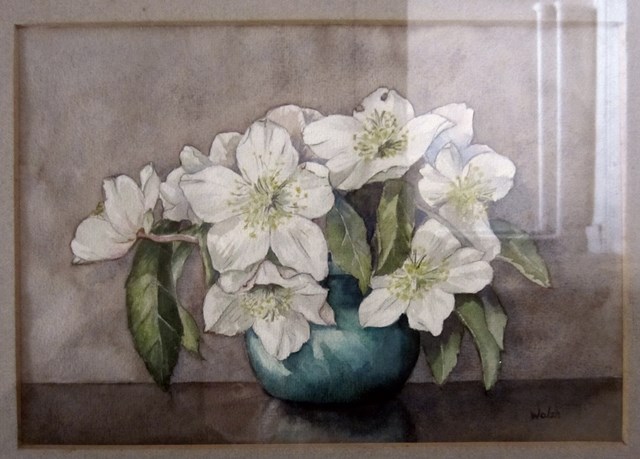 An early painting of Wendy’s

Wendy Walsh was born in Cumbria in 1915. Educated at home by a governess, she painted from an early age, encouraged by her mother. In 1941 she married John Walsh and moved to Ireland with him and their family in 1958. Wendy had spent time in Japan after the war, where she learnt ink-techniques and the Japanese philosophy of painting a subject: “They want to capture the soul of a flower, not just an image; that’s why they watch it, understand it, have it in their head and see how it behaves in the wind”. Looking at Wendy’s work, it’s clear she took this philosophy to heart and hand: the delicate petals on her apple and hawthorn blossoms have clearly opened to the spring sunshine and felt the tug of cold May winds. 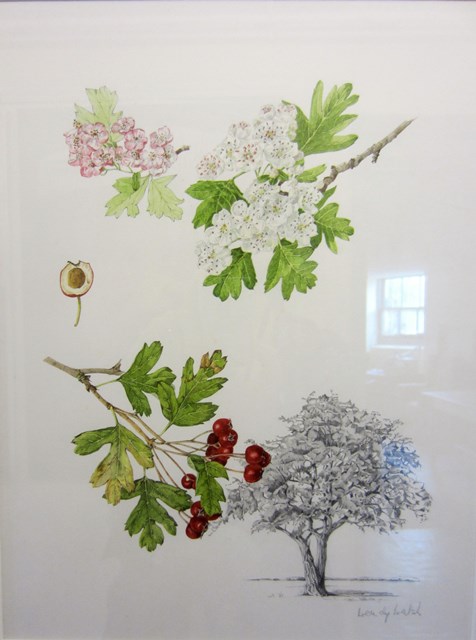 Her work throughout the 70s and 80s included a series of images of Irish flora and fauna that were reproduced on stamps. This was not her only work of course and it was in 1980 that she received her first of many RHS medals. The awards continued throughout the 80s and 90s, but according to her daughter Lesley Fennell (also a wonderful and accomplished artist), it was her Doctorate from the University of Dublin, Trinity College—conferred upon her in 1997—that pleased Wendy the most. Having been excluded from formal education during her childhood, she placed great value on it and was honoured and delighted to receive formal recognition for her achievements.

In 1983, the book for which Wendy is probably best known was published. The Irish Florilegium – Wild and Garden Plants of Ireland contains 48 colour plates of Wendy’s watercolours, many of which show plants first introduced by or in some other way connected to some of our intrepid plant hunters, gardeners and botanists. Dr E. Charles Nelson (at the time a horticultural taxonomist at the National Botanic Gardens) and Ruth Isobel Ross (a horticultural journalist) contributed the words to accompany and provide context for Wendy’s exquisite paintings. 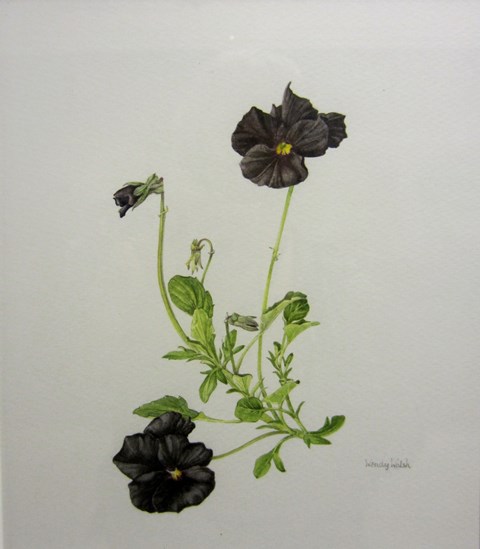 Wendy has continued to work through her 90s–an inspiration to us all–and it seemed more than right that the budding ISBA should use its first ‘official’ outing as an opportunity to acknowledge the debt we owe her and to thank her for marvellous work over the years. 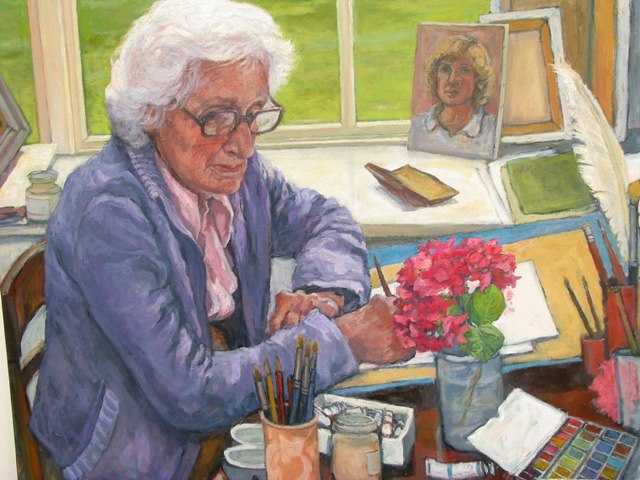 Today, Wendy’s family continues the artistic tradition, both through their own work in photography, painting, jewellery and garden design, and through their support of other artists in their own endeavours – currently the meadow at the front of the house provides an idyllic setting for sculpture of various kinds. According to Lesley Fennell, they welcome artists to come and set up in the gardens to paint at their ease. She may well be receiving some more visits from ISBA members in the future for who could resist such an offer?

Thanks to Shevaun Doherty for information for this article and the photo of Lesley’s portrait of Wendy. Thanks also to Lesley Fennell for her most informative tour of the house, the garden, and her mother’s work. Any errors here are mine! 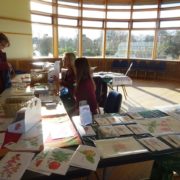 A Grand Day Out: ISBA visit to Burtown House
7 replies